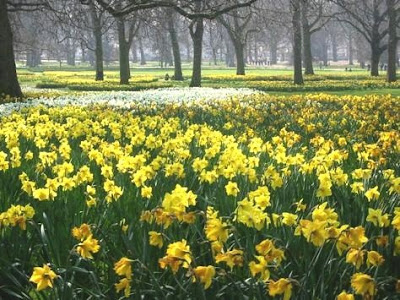 This flower has many names. It all depends upon where you live, what language you speak, and who you are!
According to botanists these flowers are a genus within the lily family and are called "Narcissus," named after the boy in Greek mythology who became obsessed with his own reflection in a pool of water. One version of this story says he fell into the water and drowned. Another version says he died of starvation and thirst while sitting by the edge of the pool while gazing at his reflection. Both versions claim that the first Narcissus plant grew from the spot where the boy died.
There are two theories as to the word "daffodil." One version is that the flower was named after "Dafydd," a Welsh form of the name "David." In Wales, it is a tradition to wear this beautiful flower on Saint David's Day, March 1st. Another version for the naming of this flower is derived from the word "Affodell", a variant of the Dutch "Asphodel."
The name "Jonquil" is sometimes used in the southeastern part of the USA to describe all daffodils. This name actually belongs to the species, "Narcissus Jonquilla" which has clusters of small yellow flowers: 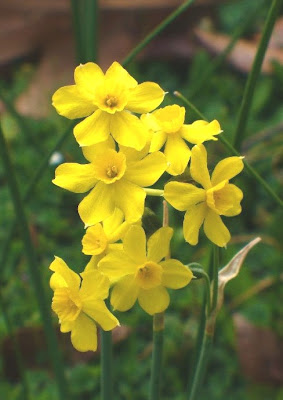 Flowers of the "Narcissus Papyraceus" species are commonly called "Paperwhites" and have clusters of small white flowers: 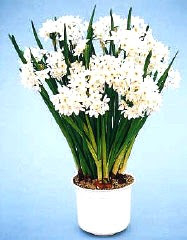