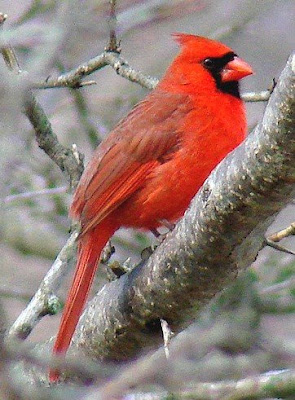 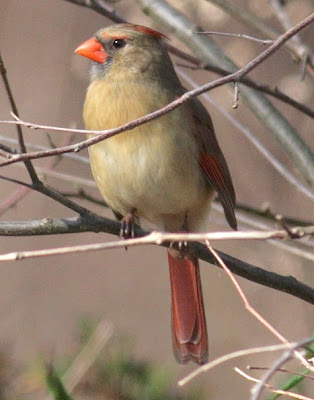 The Northern Cardinal is an 8 to 9 inch bird with a crest on the top of it's head, an orange beak and 11 inch wing span. The male is bright red with a little bit of black on his face, surrounding his beak. The female is grayish brown with slight flush of red on the wings and tail feathers. She looks like the immature males before they molt into their adult colors but there is a way to tell the difference - the youngsters have dark bills.

Both male and female cardinals sing a "Cheer-cheer-cheer" song. Sometimes the male will sit high up in a tree and call out to his mate and she will answer in return. Then she'll join him and they'll fly off together. Cardinals tend to be shy, sometimes even around other birds.

During courtship season, male cardinals are very territorial to the point of fighting their own reflections in windows and car mirrors. In the spring, I have a male cardinal that sits in the cherry tree outside my bedroom window. He calls and calls until his mate joins him and then they fly off together. During courtship, males will put a yummy bug or seed into the female's mouth to feed her. So romantic!

Northern cardinals feed on seeds, leaf buds, flowers, berries, and fruit. During the summer, about one-third of its diet is insects-beetles, grasshoppers and snails. Cardinals love large seeds, especially sunflower and safflower seeds so keep those feeders filled!

Their messy cup-shaped nests are loosely made from thin twigs and dried grass and are located low - on the ground or in bushes. They prefer park-like places within cities as well as the suburbs and countryside. 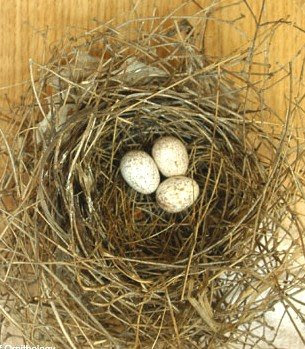 Cardinals usually have two families each summer. The males feeds and takes care of the first set of babies while the female attends to the second one.

Northern cardinals lay 2 to 5 eggs in each clutch. The eggs are off-white in color with brownish speckles and hatch in about 12 days. The babies fledge at 10 days. 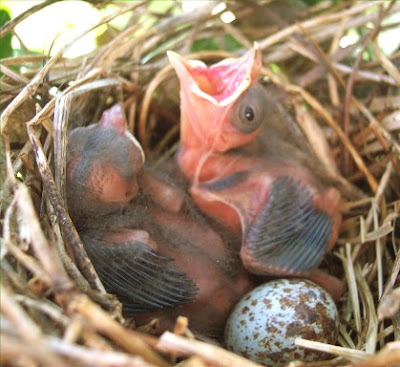 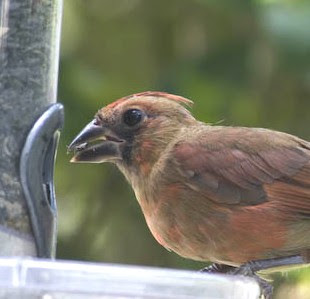 Cardinals do not migrate. They will, however, leave an area when the weather is too dry or the food supply runs out. They were originally limited to the south-east USA. Around the 1950's they started expanding north into Ontario, Quebec and Nova Scotia. They've moved into the midwestern states, northern Mexico and parts of South America, too. Humans have purposefully introduced them to California, Hawaii and Bermuda.

Here's a video of a singing male cardinal: