The History of Tulips & Video 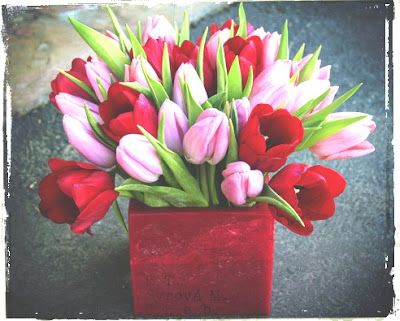 There are 150 different species of tulips, being a member of the lily family. They originated from the mountains of southern Europe, north Africa, western Asia and northeastern China. They were especially abundant in the Pamir and Hindu Kush Mountains and the Steppes of Kazakhstan.

The word "tulip" originally comes from "tulbend" which refers to the gauze and cotton fabric of turbans worn by the Ottoman Turks rather than directly to the flower itself. The Persian word for this flower is "Lale" (laleh) and so the Europeans first called it "Turkish Lale." The word "tulbend" later switched to "tulipe" and "tulipa" in Europe.

The most widely accepted story on how tulips first arrived in Europe is that of Oghier Ghislain de Busbecq, the Ambassador from Ferdinand I to Suleyman the Magnificent of the Ottoman Empire in 1554. He wrote in a letter about "an abundance of flowers everywhere; narcissus, hyacinths, and those which in Turkish Lale, much to our astonishment, because it was almost midwinter, a season unfriendly to flowers."

The beautiful mulitcolored varieties admired during the Dutch tulipomania were actually victims from an infection with Tulip Breaking potyvirus, the Mosaic Virus, that was carried by the green peach aphids, Myzus persicae. These aphids were common in European gardens of the seventeenth century. The virus caused weakened plants that eventually died. Today the virus is almost eradicated from tulip growers' fields. Today's multicolored tulips are natural occurances and are healthy.

"The Black Tulip" was the title of a historical romance by Alexandre Dumas, in which the city of Haarlem has a reward on offer for the first grower who can produce a truly black tulip.

Charles de L'Ecluse (Clusius) is largely responsible for the spread of tulip bulbs in the final years of the sixteenth century. He was the author of the first major work on tulips, completed in 1592. Clusius had already begun to note and remark upon the variations in colour that made the tulip so admired and his admiration of them quickly spread to others.

Sit back and enjoy this video of tulips in Holland, set to beautiful music:

Being and Quirkiness said...

that's a nice one! Driving in the countryside, I remember watching out for the tulips in Holland. When I saw them, they were only budding, as it was late march :P

I wish I could go there. It looks so beautiful!