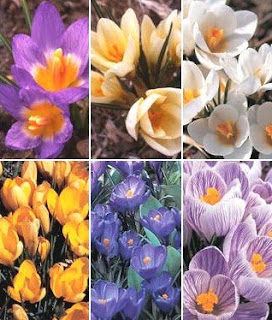 CROCUS
Crocus are native to central and southern Europe, the islands of the Aegean, North Africa, the Middle East, and middle and western China. They are part of the iris family and can grown in many different kinds of habitats. There are about eighty species of crocus. Crocus flowers and leaves are protected from the cold by a waxy outer layer. It's exciting to see early-flowering varieties of crocus blooming in the snow.

Did you know that the spice saffron is obtained from the stigmas of Crocus Sativus, an autumn/fall-blooming species? See History of Saffron.

The first crocus in the Netherlands came from corms brought back from Constantinople by the Holy Roman Emperor's ambassador in the 1560s. A few corms were forwarded to Carolus Clusius at the botanical garden in Leiden. 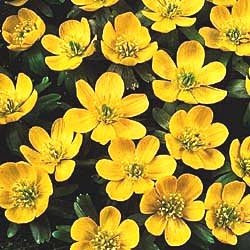 Winter Aconite is a member of the Ranunculus family, native to southern Europe and east toward Asia to Japan. The frost-tolerant flowers are yellow or white and are among the first to appear in spring. Their leaves show up when the flowers are finished.

Warning - All parts of aconite are poisonous, though the nasty taste discourages anyone wanting to eat them.

In Greek and Roman mythology, Medea tried to kill Theseus by poisoning him by putting aconite in his wine, thought to be the saliva of Cerberus, the three-headed dog who guarded the Underworld. Hercules dragged Cerberus up from the Underworld, while the dog turned his face away from the light, barking and depositing saliva along the path. The saliva hardened in the soil and produced its lethal poison in the plants that grew from the soil. Because it was formed and grew on hard stones, farmers called it 'aconite' meaning 'whetstone'. 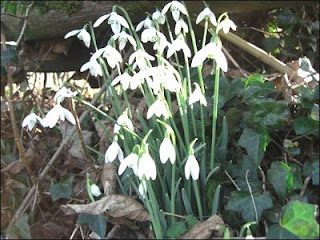 SNOWDROPS
Snowdrops are part of the amaryllis family. They are among the first bulbs to bloom in spring but there are some varieties that flower in late autumn and early winter.

Various types of Snowdrops are native to different areas of the world. Some originate from Europe, stretching from the Pyrenees Mountains in the west, through France, Germany and Poland. Others came from Italy, Northern Greece and Turkey as well as in the eastern Mediterranean, South Russia, Georgia and Azerbaijan. Still others came from Jordan, Lebanon, Syria, Turkey and Israel. Some snowdrop species have become threatened in their wild habitats and it is now illegal to collect bulbs from the wild. 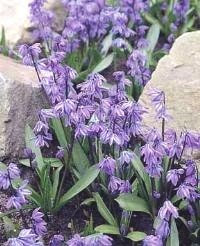 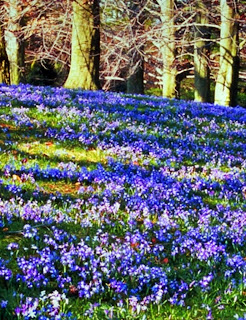 SIBERIAN SQUILL
Siberian Squill is also called known as the Wood Squill and Spring Beauty. It is a tiny, delicate intensely-colored bluish purple flower, native to Siberia. It spends the winter as a small bulb, perhaps as big as the end of a little finger. It puts up short, somewhat grassy foliage very early in the spring, produces one or more tiny blue flowers, goes to seed, and disappears by summer. Siberian Squill are great for naturalizing and in between rocks. They are very cold-tolerant.